ASMALLWORLD AG (SWX:ASWN) expects to be profitable for the first half of 2019

Zurich, 20.08.2019 - ASMALLWORLD AG expects to be profitable for the first half of 2019, both in terms of EBITDA and net income. In the first half of 2018, the company reported a loss of CHF -1.4M at EBITDA level. This significant improvement in the company's earnings is accompanied by a previously communicated revenue growth of 40% and an increase in the number of members.

Based on preliminary figures, ASMALLWORLD AG today announces that it expects to be profitable for the first half of 2019, in terms of EBITDA as well as net income. In the same period in 2018, the company reported an EBITDA loss of CHF -1.4M. This significant improvement in the company's earnings is the result of a consistent strategic and operational expansion and follows a previously announced revenue increase of more than 40% compared to the same period last year.

The financial report for the first half of the year will be published on 3rd September 2019.

During the first half of 2019, the company further developed its leading travel & lifestyle community. On June 25th, ASMALLWORLD launched a completely new iOS app which makes it easier for members to get in touch with each other and to benefit from all the services offered to the ASMALLWORLD community. Further, on 4th June, the English-speaking website of First Class & More was launched, making the comprehensive Smart Luxury Travel offer accessible to a new and large target audience, expanding the company's revenue potential significantly.

The expansion and integration of LuxuryBARED, the hotel booking platform acquired in February 2019, is advancing according to plan. It is expected, that before year end, ASMALLWORLD members will be able to book a large selection of luxury hotels with one click directly from the app and website while benefiting from great privileges such as room upgrades and late check-outs. The company is currently investing in the technical integration of the implementation.

This autumn, the iconic North Island resort in the Seychelles, managed by ASW Hospitality AG, will become part of Marriott's "The Luxury Collection". The required property improvement plan and the integration of the inventory and reservation systems are progressing according to plan and should be finished on schedule.

This press release and further information can be found at www.asmallworldag.com. 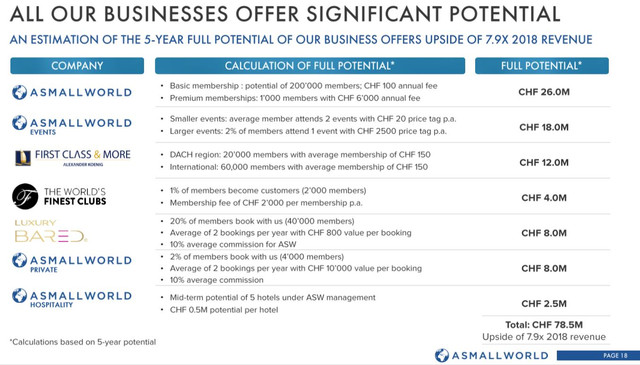