Bernanke signals no new round of easing

By By Robin Harding and James Politi in Washington

Ben Bernanke sent a strong signal that the US Federal Reserve is not planning to loosen monetary policy despite weaker economic data, saying that the recovery “appears to be proceeding at a moderate pace”.

“The US economy is recovering from both the worst financial crisis and the most severe housing bust since the Great Depression, and it faces additional headwinds ranging from the effects of the Japanese disaster to global pressures in commodity markets,” the Fed chairman said in a speech in Atlanta on Tuesday. “In this context, monetary policy cannot be a panacea.”

Mr Bernanke’s comments will dash market hopes that the Fed might launch a third round of quantitative easing – nicknamed QE3 – in response to weak numbers on growth and the labour market recently.

Wall Street turned negative late on Wednesday and the 10-year Treasury yield eased back under 3 per cent as Mr Bernanke began speaking.

Jobs data last week showed that the US economy added only 54,000 jobs in May, while annualised growth in the first quarter of the year was only 1.8 per cent. But Mr Bernanke’s comments suggest he expects a ‘soft patch’ rather than a more serious slowdown in the recovery.

He noted that “recent indicators suggest some loss of momentum” in the labour market and said that the recovery was “uneven across sectors and frustratingly slow”. But he suggested that “with some moderation in gasoline prices in prospect” growth and hiring are likely to pick up again in the second half of the year.

Quantitative easing means that a central bank buys assets in an effort to drive down long-term interest rates once it has already cut short-term rates to zero. Last November, the Fed launched a second, $600bn round of asset purchases that are due to finish at the end of June.

But Mr Bernanke suggested that, rather than buy more assets, the Fed is more likely to respond to the slowdown by holding on to the assets that it has for a longer period.

“Although it is moving in the right direction, the economy is still producing at levels well below its potential; consequently, accommodative monetary policies are still needed,” he said. “Until we see a sustained period of stronger job creation, we cannot consider the recovery to be truly established.”

Other Fed officials mirrored that approach. “I have to express some frustration with this economy,” said Dennis Lockhart, president of the Atlanta Fed, in a speech on Tuesday. Mr Lockhart did not talk of further easing but said: “I am wary of tightening monetary policy in the face of quite ambiguous economic circumstances unless doing so is absolutely necessary to meet the [Fed]’s price stability mandate”.

Much of Mr Bernanke’s speech was dedicated to inflation and commodity prices - concerns that have slid down the market’s list as growth data weakened in recent weeks. He was at pains to argue that commodity prices are unlikely to continue rising and that the rise to date was not due to the Fed’s loose monetary policy.

“Most FOMC participants currently see the recent increase in inflation as transitory and expect inflation to remain subdued in the medium term,” Mr Bernanke said. 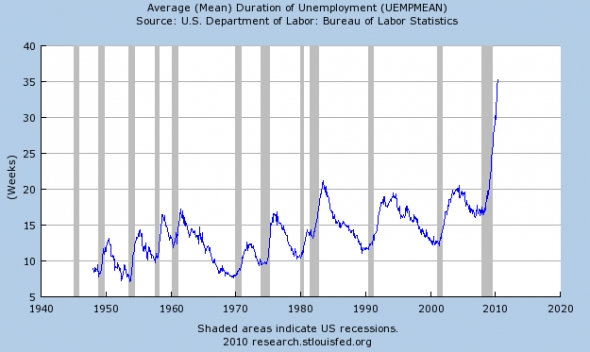