Money - Get rich or die tryin'

WOMEN & CATS WILL DO AS THEY PLEASE, AND MEN & DOGS SHOULD GET USED TO THE IDEA.

A DOG ALWAYS OFFERS UNCONDITIONAL LOVE. CATS HAVE TO THINK ABOUT IT!! 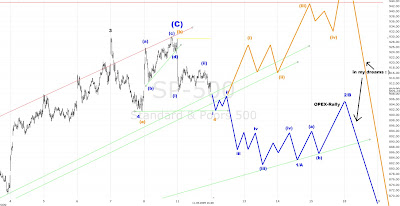 plan your trade and trade your plan

Lest you think this type of analysis is like reading tea leaves, Prechter gained fame predicting the stock market crash of 1987. In 2002 he wrote a book titled Conquer the Crash -- You can Survive and Prosper in a Deflationary Depression. In it he correctly forecast a huge credit contraction, brought on by all the mortgage and debt issues that we're now facing.

Reading this book today, it seems as if Prechter had a crystal ball. That's why his current view of the market is so compelling. After forecasting this current rally in February, Prechter suggests traders should be looking for an exit point soon, an opportunity to sell short. He laments: "On the major trend, there's such a long way down to go."

Prechter calls it a "C" wave in Elliott Theory -- and notes: "Declining C waves are usually devastating in their destruction." He says the "credit implosion" is not finished. Much like Japan, he predicts, we'll have to live through a long period of declining asset values, summed up in one word: deflation.

Traders can follow these volatile waves, but where do long-term investors hide during an extended deflation? Not in stocks, or real estate, or commodities -- even though today's prices seem like bargains. "Until the credit implosion is over, the only place to hide is cash -- safe equivalents such as Treasury bills. Holding on to your money will give you a chance to buy the real bargains when the bottom eventually arrives -- several years from now."

I had just finished digesting this forecast from Prechter when I received the latest issue of Bert Dohmen's Wellington Letter. (dohmencapital.com). Regular readers know that I value Bert's perspective highly, as he uses both technical analysis and an insightful view of both politics and the economy.

Noting that bear market retracements can be deceiving, Dohmen pointed out that the first rally after the historic 1929 crash extended into 1930 -- and produced a 52 percent gain. And then the market plunged another 64 percent!

As for the current rally, Dohmen says time is running out. He advises: "Bear market rallies are usually eye-catching and make the casual investor believe that it's a new bull market. Don't make that mistake and fall into that trap."

Sorry to spoil your day with these unpleasant forecasts. We'll only know in hindsight if the bulls or the bears are right. But it's always dangerous to get caught up in the euphoria of the bullish crowd. We learned that lesson already, didn't we? And that's the Savage Truth

Money - Get rich or die tryin'